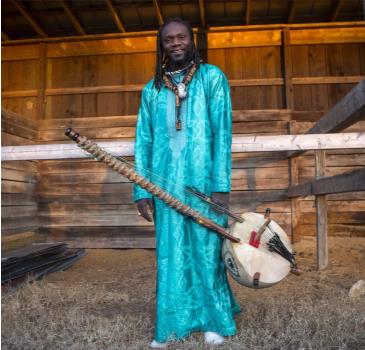 Event tickets will accommodate up to 6 guests, including children, max in one 8 x 8 square POD.

BYOC – BRING YOUR OWN CHAIR

NC ABC LAW PROHIBITS OUTSIDE BEVERAGES AT THE EVENT

You may order food and drinks from Parts&Labor at the GarageBar, but they will not be able to deliver your order directly to your pod. Please instruct the server that you are ordering for Take-out.

Tickets are nonrefundable if weather permits. If the event is cancelled due to weather, guests will be issued a rain check” for another date.

Diali Cissokho & Kaira Ba ecstatically explore the spiritual songs, stories, and rhythms of Senegals millennia-old Mand culture. Indeed, Cissokho comes from a long line of prominent griots who are entrusted to maintain a West African villages genealogies and important ceremonial affairs through song. But he is much more than a preservationist. Cissokho and his band, Kaira Ba, effortlessly integrate the traditional sounds of the kora with a modern rush of electric guitar and an exuberant rhythm section. Together, Diali Cissokho & Kaira Ba sustain one of West Africas most expressive legacies with their own energetic interpretations.

The band formed in North Carolina in January of 2011, shortly after Cissokhos immigration to the US. Kaira Ba has produced three full length albums, toured extensively in the US, and traveled twice as a band to Senegal. In 2014, Kaira Ba was nominated for the prestigious continent-wide All Africa Music Award (AFRIMA) in the category Best African Group for their album The Great Peace . In 2018 the band released its most ambitious album to date, Routes, which was recorded alongside a broad cast of guests in both North Carolina and Senegal. The album was met with critical acclaim upon its releases, being favorably reviewed by Afropop Worldwide, The Financial Times, OkayAfrica, the famed rock critic Robert Christgau for Noisey/Vice, and Songlines who wrote, This album is up there with the groundbreaking recordings of Thione Seck, Baaba Maal and Youssou NDour. Kaira Ba has performed and taught at Universities, appeared in front of large festival audiences and shared stages with some of Africas most prominent international artists. In all its work, Kaira Ba is committed to sharing its story and music in the name of cross-cultural learning, believing that music has the power to transgress borders and serve as an important resource for education, restoration and healing.

Diali Keba Cissokho (kora, vocals) A renowned korist and percussionist from Senegal, Diali moved to the US after years of performing and teaching in Senegal and in Europe. Born into a rich ancestry of Manding griots (jalis), Diali has been playing traditional West African music for as long as he can remember. While his greatest love is the kora, a 21-stringed West African bridge harp, he is also an accomplished singer, songwriter, and percussionist. Historically, each village had its own griot who told tales of births, deaths, marriages, battles, hunts, affairs, and other important events and celebrations. In Mande society the griot, or jeli, served as a historian, advisor, praise singer, and storyteller. These musicians served as walking history books, preserving and sharing the stories and traditions of their culture through song. This inherited tradition, with deep connections to spiritual, social, and political powers, has been passed down through generations. Dialis mother, MoussuKeba Diebate, and father, Ibrahima Cissokho, both hailed from long lines of griot musicians. Dialis grandfather was the famed griot korist Lalo Keba Drame, who was among the first griots to tour internationally in the 1960s, after his recordings became popular both within and outside of Senegal. Diali seeks to honor his ancestors through all of his work as performer, teacher, and collaborator.

Jonathan Henderson (bass) Currently a PhD candidate in ethnomusicology at Duke University, Jonathan is a multi-instrumentalist active as a composer, producer, and educator. He has studied under master Brazilian percussionist Jorge Alabe and contemporary classical composer Stephen Jaffe, worked alongside Senegalese griot Diali Cissokho and collaborated with talented artists in the US, West Africa, Brazil and Indonesia. Most recently, Jonathan produced Diali Cissokho & Kaira Bas critically acclaimed album Routes . Recorded on two sides of the Atlantic and enlisting the contributions of over 30 musicians in North Carolina and Senegal, Routes was released on Jonathans record label, Twelve Eight Records in June of 2018. Jonathan has composed music for film and theater, and taught courses in music at the high school and college level. Jonathan is a co-founder of Diali Cissokho & Kaira Ba and regular contributor to numerous other bands and performing ensembles. He holds a masters degree in ethnomusicology from Duke University. Find out more at: https://www.twelveeightrecords.com/ and http://www.jhendersonmusic.com/

Will Ridenour (percussion) is a professional musician from Greensboro, NC who specializes in international folkloric percussion as well as the kora, a harp-lute from West Africa. Since 1997, Will has studied with master kora and percussion teachers in Mali, Senegal, Sweden, and the US, including 4 study trips to West Africa. Will holds a B.A. in Anthropology from UNC-Chapel Hill and has been the recipient of two North Carolina Arts Council grants for musical projects centering around the kora. He has performed in 28 countries worldwide, and has scored productions for dance, theater, and documentary film. Currently, Will works with children and adults in schools, camps, and hospitals, and records and performs with Diali Cissokho & Kaira Ba , Grand Shores ,

John Westmoreland (guitar) has been performing professionally for over a decade. He began playing blues, rock, and folk music as a teenager and went on to study Jazz and Classical Composition at Berklee College of Music where he was a recipient of the BEST scholarship. In 2011 he became a founding member and lead guitarist for Diali Cissokho & Kaira Ba. John also writes and performs his own original music which can be heard on his 2018 debut album Cast Fire. Aside from standard performance contexts, John provides music for yoga classes and meditation, relaxation music sessions for people with Alzheimers and Dementia, and performs as part of UNC Hospitals Door to Door music program. In 2014 with the help of an Emerging Artists Grant from the Durham Arts Council John travelled to South America to study ceremonial healing music of the Upper Amazon and Andes regions of Peru. Currently hes working on a performance and ancestral research project centered around the life and work of T-Bone Slim (Matti V. Huhta), a first generation Finnish-American hobo poet, songwriter and activist who John recently discovered was his great grandmothers older brother.

Austin McCall (drum set) is a professional musician from Chapel Hill, NC specializing in drum set and percussion. He has studied with some of the Greats such as Mama Kone (percussion, Habib Koite), Frank Worrell (drum set, Jack Dejohnette), and Billy Martin (drum set, Medeski Martin & Wood). He has travelled studied percussion and drum set in many places over the years, including 3 trips to West Africa. Austin is a co-founder of Diali Cissokho & Kaira Ba, and performs with other acts such as Paperhand Puppet Intervention, Jonathan Byrd, Violet Bell, and Scythian. He is the co-creator/co-director of Lumanity, An illuminated spectacle of ones journey through light, and rhythm. Austins approach to the drum set is not only one as a drummer, but also a percussionist, which allows him to explore the possibilities from a different angle, such as playing dun dun, calabash, or djembe patterns on drum set.